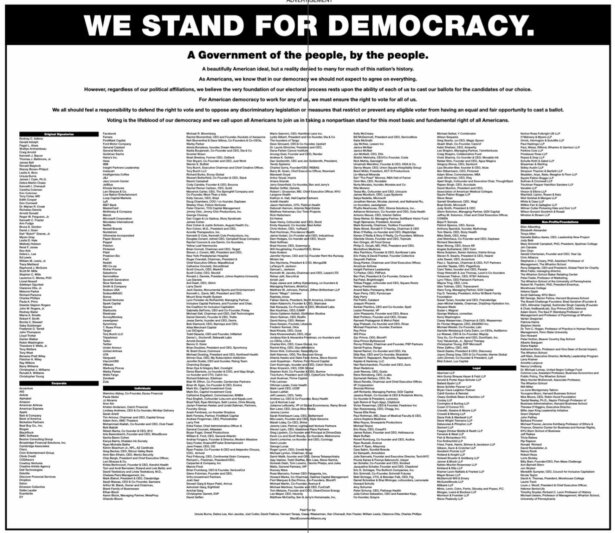 Amazon, Google, GM, Starbucks and hundreds of companies stand for democracy in US.

What side do you want your company to be on? Do you want to remain part of the problem, or will you be part of the solution?People are beginning to realize that many things have been going wrong, and it feels as if the whole world is racing at a speed that no longer seems under control. Civilian protests, demonstrations and commotion on a small or large scale is revealing the gap between those in command and the average Joe.

People have lost trust in many institutions. At the same time, more and more people realize they have the power to act themselves. They also realize they have the power to force companies to take a stand. A recent example of this can be spotted in the US. Under pressure of people, over 300 companies jointed forces to oppose to new voting restrictions from the Republican party. These restrictions will make it more difficult for certain people to vote, so they are considered unfair and discriminatory. Hundreds of American companies joined forces and published a newspaper ad stating they stand for democracy.

Although it is tricky for companies to get involved in political issues, I am convinced that success lies ahead for companies that realize they need to be outspoken about the things they care about. Brands can become powerful forces for positive change in society and they are in a position to lead the way by taking their responsibilities. So you should ask yourself: What side do you want your company to be on? What do you stand for? Do you want to remain part of the problem, or will you be part of the solution?