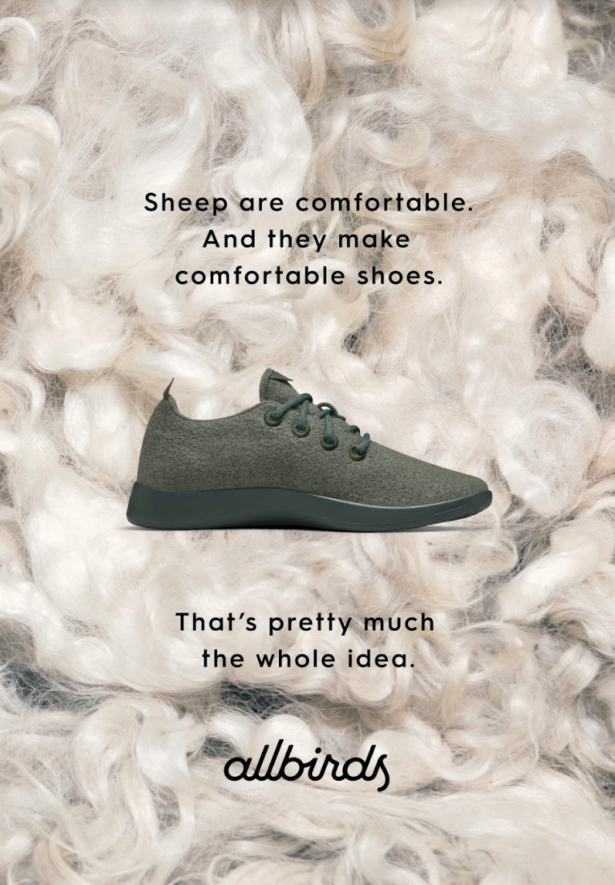 How woolly sneakers brand Allbirds are leading the climate-positive race. A carbon-neutral brand build upon reliability and responsibility for the planet.

They launched their sneakers using a direct-to-consumer approach and are focusing on environmentally friendly footwear. Now, you’re probably thinking you’ve heard this one before, and that this is just one of the many new brands that aim to be eco-friendly. Well, think again: Allbirds is different, which may be one reason why they were valued at $1.4 billion after only two years!

How can such a young company take the lead in the environmental race and become a reliable partner to established major brands such as Adidas? Founder Tim Brown was a professional soccer player in Australia until he retired from the game in 2012. Throughout his career, he was astonished at the cheap materials of his soccer footwear. He wondered why nobody used merino wool—a luxury fabric from Australia and New Zealand—instead of cheap synthetics. In 2014, he brought his ideas to a Kickstarter campaign. It took them two years in research and development to launch their first model in merino wool.

The brand was an instant hit and quickly gained a reputation for quality. Online reviews praised both the comfort of the shoe and the commitment of the brand to environmental sustainability. Allbirds doesn’t consider themselves just a shoe company—they want to be a material company. They created other unusual materials like eucalyptus tree fibre and launched another R&D program to develop a carbon-negative sugarcane foam called ‘SweetFoam’. This foam is not just any foam: it actually sucks carbon from the air. It took two years to develop and cost millions of dollars to create. Still, they never planned to keep it a trade secret. They published the recipe for SweetFoam, making it available to all interested parties. Releasing their formula was equal parts altruistic and pragmatic, Zwillinger says: ‘The altruism is that if everyone uses this, it’s going to be great for the environment. The pragmatism is that if everyone uses it, the cost is going to go down.’

But Allbirds is about more than unusual materials. They are a carbon-neutral company. They have rigorously assessed their own carbon footprint across the entire operation, from the raw materials used in the shoes to the carbon employees emit on their commute to work—an amazing achievement to have reached in such a short time.

Their reputation for effort and reliability, constructed almost overnight, didn’t go unnoticed. Adidas teamed up with them and are planning to combine their respective areas of expertise to create a shoe that has a carbon footprint of just 2 kg compared to the average 12.5 kg of other sneakers on the market. ‘Adidas’s goal is to sustainably manufacture at scale,’ says James Carnes, VP of brand strategy at Adidas. ‘When it comes to sustainability, we don’t see ourselves competing with one another, but competing for the future. If we don’t bring change quickly, there won’t be a future to speak of,’ says Tim Brown, Allbirds’s co-founder. They hope to release the Allbirds/Adidas shoe in 2021.

Neil Blumenthal, the Warby Parker co-founder, considers Allbirds’s sustainability efforts crucial to the brand’s popularity. ‘We’re living in the age of the internet, where people can find out every bit of information available,’ he said to Inc Magazine. ‘If you’re inauthentic, you’re easily found out,’ he added. In other words, Blumenthal says: ‘It’s finally cool to care.’ A beautiful example of how reliability and trust can be built by a newcomer in an old industry!